Headline of the Day: 紅葉マークの表示義務 "Obligation to Show the "Autumn Leaf" Sticker

On the Metropolitan Police's web site, there is a notice that, according to 【道路交通法第７１条の５・第２項】, Road Traffic Law, Section 71, Clause 2:

= Drivers over the age of 75 must display on the front and back of the vehicle the "Autumn Leaf" sticker signifying "elderly driver" when operating common passenger vehicles.

(I hope there aren't drivers over 75 operating commercial trucks!) 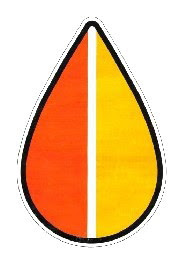 When I first got to Japan, I was puzzled as to why the sticker indicating "Learner" 初心者was a green arrow, but now I realize it's a green, sprouting leaf, which makes more sense: 若葉マーク (although it still looks like an arrow to me)

The "elderly driver" sticker 紅葉マーク looks like a dried up leaf about to fall from the tree, which is a pretty depressing reminder for the elderly drivers. (This reminds me of an article I read about slang terms used by doctors in the UK; apparently, "CTD" on a patient's chart stood for "circling the drain"...ack!)
At least the name is better than the one used before for drivers over 70: 枯れ葉マーク "areha maaku," which is literally "withered leaf" sticker. I think I'd refuse to put that on my car too, if I were in their shoes.
Although the site indicates that it's an "obligation" 義務, according to the Japan Times, the provisions relating to fines 反則金 【はんそくきん】(lit. "against + rule + money) of 4000 Yen for failure to comply 遵守 【じゅんしゅ】 will not be enforced 実施【じっし】されていない. (The police web site, however, still has the fine listed with a notice in red saying "現在は指導期間としています" or something like "The Period of Instruction is currently in effect."
According to the article, the requirement is supposedly being downgraded by the National Police Authority (NPA) to an "obligation to make an effort" because approximately 75% of drivers over 75 already use the stickers. In my opinion, it would seem that the ones who refuse to use the stickers are precisely the ones whose operation of a vehicle would require a warning to other drivers.
According to the web site, there are other stickers, which I haven't noticed on the streets yet.
A butterfly for 聴覚障害者標識 = Symbol for Hearing & Vision Impaired Drivers:

A four-leaf clover for 身体障害者標識 = Symbol for Physically Impaired Drivers:

Both of these are truly puzzling. I don't know what a butterfly has to do with hearing/vision impairment. It also seems like the internationally-recognized symbol for "disabled" would have done just fine, and I'm not sure what a clover has to do with physical impairment. (Maybe soon someone will tell me that it's actually four heart-tadpoles or something...)
Speaking of which, I'm seeing the use of "身体不自由" all over. Apparently because the term 障害者 is disfavored because it has connotations of "injury," organizations are using "身体不自由" which is closer to "physically challenged."

Posted by Michael Panzera at 1:46 AM