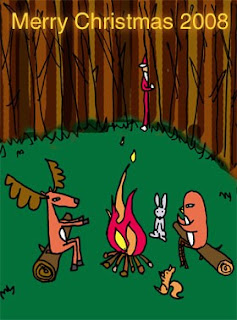 Yesterday's expression about a colt coming from a gourd reminded me of another 4-character expression in Japanese that I love:

This reminds me of an incident I'll never forget that happened a few years ago when I went to Argentina for a summer internship. I was kicking myself because I had forgotten to take the phone number of a good friend Juan Ignacio whom I had met in Buenos Aires a few years earlier and gradually fell out of contact. On the second day after I arrived, I was apartment hunting and accidentally missed the subway stop where I was supposed to get off. While I was on the subway, feeling depressed and lonely, someone suddenly called out my name and grabbed my shoulder! It was my friend JuanIg, who just happened to be on the same subway car and didn't even know I was in Argentina. (He said he never takes that line but for some reason I can't remember he wound up on it.) Everyone else was looking, I think, as we excitedly reconnected and expressed our surprise, but it was a great moment. I remember thinking of the chances of that happening: going to a foreign country, taking a random subway, missing my stop, and bumping into the one person in that city you know, etc. Pretty slim! Definitely rates a 盲亀浮木 in my book!

Anyway, this expression is apparently based upon a Buddhist quasi-parable used to demonstrate the slim chances of being born in a life in which there is possibility of attaining enlightment. The metaphor involves a blind turtle surfacing a countless number of times and the chances of that turtle one day hitting upon a floating log in such a way as to go right up into it. Or something like that. There are a lot of interpretations that I've come across on the Internet but the way I see it (admittedly reflecting a way of thinking that is distorted by the 70s and far removed from that of the Boddhisatvas...), it's a good reminder to appreciate the opportunities we have been given in our lifetime.

I recently saw a video of a guy from New Zealand who was born without limbs and he spoke about how, even though he would rather have limbs if given the choice (he gets credit for being honest), he is thankful for the doors that his condition has opened for him in life and forced him to focus on what's really important, i.e., connections with other people, etc. Very heartfelt and moving.
Last weekend, I met a deaf guy here in Tokyo and I've been learning a lot of Japanese Sign Language from him during our conversations. My rudimentary ASL is helpful but only gets me so far, and he has been amazingly patient and we've been able to communicate much better than I had expected. (The fingerspelling 指文字 itself was a formidable challenge, but I found a good site on line and finally succeeded in getting the entire syllabary down.) It was great to be able to listen to what he had to say about growing up deaf in Japan. I was surprised that his parents who are both hearing didn't learn sign language. I had met another deaf Japanese guy in NY a couple years ago and he told me that his parents wouldn't let him sign in public because they were embarrassed...but according to the guy I just met, that mentality still exists but is thankfully getting rarer, at least in the cities and with younger generations. As we were signing on the subway, we were getting a lot of stares, so I was imagining how that must be to experience that on a daily basis growing up. (He drew the picture attached to this post, btw.)

So now that I'm looking back on 2008, I'm thankful for the opportunity to come to Japan and be able to learn so many new things every day, meet interesting people, eat amazing food, and visit places I've always wanted to go. So even though life isn't "perfect" by any stretch, the rarity of a life that affords such wonderful opportunities and the ability to connect (and reconnect) with such great people is something I definitely have come to appreciate these past few years. So thanks, New Zealand guy; thanks, JuanIg, and thanks, blind turtle!
Posted by Michael Panzera at 7:57 AM