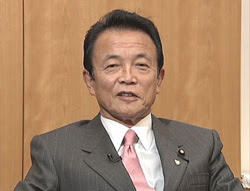 Here's a list of the errors that Prime Minister Aso has made in speeches (so far) that everyone is jumping all over him about. I had been wondering what exactly the errors were, but few people I know could remember what they were, or what exactly he got wrong, so I tracked them down in case anyone is interested. Good excuse for learning some new words!

2. Choice of The Penis Generation

He meant to use the term 団塊世代 【だんかいせだい】 (n) the babyboomers; the baby boom generation (literally, the "lump/node generation")...but instead of saying "daikai" he said "daikon" which is the word for "phallus" 男根 【だんこん】. Freudian slip?

In seeing the term 未曾有 meaning "unprecedented" or "unheard of" he read it as みそゆ...which sounds like "味噌" (miso) and "湯" (yu = hot water)... but it's supposed to be pronounced 【みそう】 or 【みぞう】. In my book, this one is an understandable slip, given that the yomi for 有 is rarely just う, but to a lot of my Japanese coworkers, this was unforgiveable. In fact, at the Administrative Training for Japanese bureaucrats that I attended a couple months ago, a speaker intentionally mispronounced this word, and got a big laugh from the audience (one of the only ones in 2 weeks...). It seems that the sentiment is that government officials are supposed to be highly educated, and slips like these undermine the public's confidence. But I suppose making fun of him for these slips is a proxy for critcizing him b/c he's so ineffectual in more important ways, thereby perpetuating his inability to be taken seriously.

He read the word 繁雑 meaning "complex; intricate" as 【ひんざつ】...but it's supposed to be pronounced【はんざつ】. As a result it wound up sounding like "frequent and complicated". I'm guessing that in his head, he inadvertently saw the kanji for 繁 and associated it with 頻繁 【ひんぱん】 (adj-na) frequent; incessant, and transposed the yomi. Who knows? I'm just glad b/c I learned a new word from his gaffe!

5. Down in the Dumps

Instead of pronouncing 低迷 meaning sluggish as 【ていめい】, he said 【ていまい】. I guess that he was thinking of the 迷 in 迷子 【まいご】 (n) lost (stray) child. This one really surprised one of my coworkers b/c she said it's not an uncommon word at all. Either way: new word for Mikey!

The last one I found is when he pronounced 基盤 meaning "foundation; basis; base" as【きはん】 instead of 【きばん】. This is interesting because the "ban" doesn't seem to be a pronunciation born of necessity (like an "n" shifting to "m" before a consonant as in "nanboku" > "namboku"). There are words in Japanese that are pronounced "kihan":

All great words...especially "returning to Osaka"! So instead of criticizing Aso for his screw-ups, as my Japanese coworkers like to do, I should thank him for the vocabulary building!

(Apparently, his blunders have revived an interest in kanji, and a book about commonly mispronounced kanji is flying off the shelves.)

Apparently, instead of pronouncing 踏襲 as【とうしゅう】 (meaning following (e.g. suit, in someone's footsteps, etc.)), he pronounced it as "ふしゅう," which sounds a lot like 腐臭 【ふしゅう】 (n) smell of something rotten; rotten smell. I'm guessing that he forgot the onyomi for 踏 ("tou") and remembered only the kunyomi, which is "fumu" (to step). I had never seen the word 踏襲 before, so thanks again, PM Aso!

(You'd think that by now he'd start reading his speeches before reading them in public, or at least have his staff put furigana on the teleprompter!)
Posted by Michael Panzera at 6:25 AM