Word of the Day: Judicial Scrivener 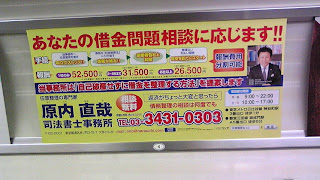 ly. It's advertising the services of a 司法書士 【しほうしょし】, which I've seen translated on ads as "judicial scrivener," a term I haven't seen since I read a short story by Herman Melville. Basically, the guy doesn't have a law degree, but has apparently studied law and is offering 相談
"consultations" regarding debt relief, among other things.

Second, is there are a *market* for these legal consultations by non-lawyers? By the number of ads I'm seeing, it's a thriving business. It's no mystery to me why there's a need for these services. It's widely acknowledged that the number of lawyers in Japan is kept artificially low by an insanely difficult bar exam, which conveniently allows lawyers to charge high fees. The unfortunate consequences of this include (1) there are a lot of people who are unable to afford or even have access to a lawyer in some parts of the country and (2) a lot of people who have studied law but haven't taken/passed the bar exam are in jobs that in the States would be considered practicing law, like this non-lawyer fellow offering "legal consultations." Most of my co-workers have studied law but aren't "弁護士" even though they are doing things that on a daily basis that lawyers do: researching legal issues, drafting legal memos, interpreting regulations, etc.

Third, are people able to distinguish between a "scrivener" and a "lawyer"? Such a practice is prohibited by law in the United States (champerty), so an ad like this would raise hackles. Could you imagine an ad by a paralegal offering "legal consultations"? That paralegal would need to get a lawyer pretty quickly.

I was at lunch last week and a woman asked me "why is it so easy to become a lawyer in the United States?" After nearly choking on my 鯖 【さば】mackerel on this remarkable lack of tact (not the first instance), I turned the question back on her and asked whether she considered that maybe the number of "lawyers" in Japan is kept artificially low, and so now you have a lot of people providing quasi-legal services in an unregulated manner to people who can't afford or even have access to a real lawyer. Did she think this was a good thing? Did she not know that there were parts of Japan where there were no lawyers? This may sound like a good thing to Americans who see the excesses of too much litigation, but the consequences of not being able to assert ones rights fully undermines the justice system considerably, in my view.

Considering that she had studied law but did not pass the exam, I think she saw my point...but I got the sense that it wasn't a topic she wanted to delve into any further, so I left it at that.
Posted by Michael Panzera at 4:29 AM