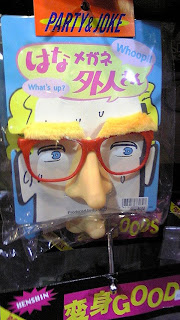 Found a few really good words this past week, but I've been adjusting to my new job so I haven't gotten around to posting them:

Useful, in a metaphoric sense!

This is one I've been looking for! I wanted to express how my Japanese improved quickly when I first got here, but it seems to have leveled off (and may even be getting worse!), so this seems to do the trick. I literally "bumped my head"...

I love this one! Literally, "bundle ten sticks into one." I'm sick of saying "一般化" all the time b/c it lacks punch when I'm disagreeing with someone who has just made an insanely broad-brush statement. Unfortunately, the few people I've tried it out on didn't recognize it, so I imagine it's not in current usage. Still, it's another arrow 矢【や】 to add to my quiver 箙【えびら】.

On a side note, a friend of mine says that when he was a kid, he thought the expression was "十羽ひと空揚げ” or: "taking ten birds and making one fried chicken dish." Hah! Reminds me of how, when I was a kid and heard someone say "shut the window, or you'll catch a draft," that it was "catch a giraffe," which made no sense but was still plausible, at least to my 8-y/o mind.

I saw this one in adverb form: Xに鑑みて in view of X; in the light of X; taking X into account. Much more precise than について、に関して、etc. for when you want to get across the idea that you're building on things that have been established.

A bonus is that the kanji is used to get across the idea of "to discern" or "to discriminate" so we see it in all sorts of interesting combinations:

a. 印鑑 【いんかん】 (n) stamp; seal
(the kanji finally makes sense to me now: the impression that one uses to distinguish oneself from others!)

So then we get:

from which we get: 雌雄鑑別 【しゆうかんべつ】 (n) sexing (of chickens, silkworms, etc.)
(literally: female/male distinguish)
Posted by Michael Panzera at 5:07 AM